Celia Lury, Double Blind, Double Bind?
I will be discussing the use of technology to extend border zones, effectively infinitely, from their physical geography. I will explore this in the use of teleconferencing in migrant interviews, UAV patrols in international waters, artificial intelligence and biometrics, and ultimately in algorithmic constructions of citizenship itself.
BORDER TOPOLOGIES
Based on comprehensive research and fieldwork, the artist elaborates in her video installations the profound interlocking of resources, ecology, and migration. By means of her artistic practice (Deep Weather, Egyptian Chemistry), Ursula Biemann raises questions about the entanglement of aesthetics, ecology and geopolitics which brought forth a new understanding of artistic research in recent years. How can the interrelation of art and science open up experimental fields of agency that can face up to future challenges such as a changing geochemistry and biosphere? The artist addresses possible aesthetic strategies that can help us consider spatial and temporal dimensions on a planetary scale.
Ursula Biemann, The Cosmo-Political Forest
Liquid Traces: Investigating the deaths of migrants at the EU's maritime frontier

Because any trace on water seems to be immediately dissolved by currents, the oceans have long been associated with a permanent present, that resists any writing of history. Their liquid expanse has equally represented a challenge for governance: the impossibility of drawing stable boundaries in ever changing waters has led to imagine the seas as a space of absolute freedom and flow - the "free seas". This presentation takes a radically different approach and seeks to reconceptualise the sea as a material field of struggle. Starting form Forensic Oceanography, a project that I have co-led since 2011, I will talk about the policies and practices by which the Mediterranean Sea has been recast as the Southern border of the EU, causing over 16.500 documented deaths over the last 20 years. A complex sensing apparatus is fundamental to this form of governance that combines the division of maritime spaces and the control of movement, and that instrumentalises the partial, overlapping, and "elastic" nature of maritime jurisdictions and international law. And yet those very remote sensing devices, when used against the grain, can provide evidence of the violence perpetrated against migrants at sea and help to challenge the regime of visibility imposed on this contested area.
Lorenzo Pezzani, Liquid Traces 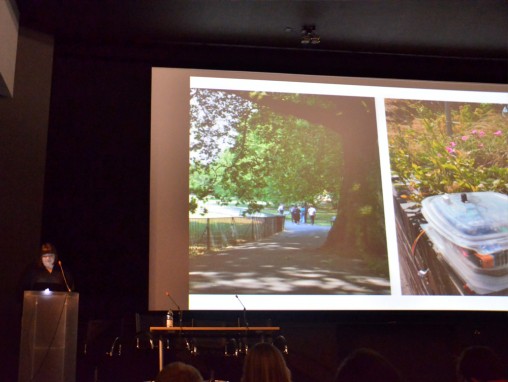 The city centre of São Paulo has increasingly become a key site for local housing movements to challenge the rules and practices of differentiated citizenship in urban Brazil. This is in line with Sassen's analysis arguing that the last two decades have seen "an increasingly urban articulation of global logics and struggles, and an escalating use of urban space to make political claims". Organised vacant buildings and occupations led by social movements in the centre of São Paulo are prominent examples of urban spaces being appropriated to advance the claims of otherwise marginalised urban subjects.

In the face of rising inequalities and social and spatial divisions across the city, squatted buildings thus emerge as a frontier space with political consequences at various times and scales. Apart from acquiring a symbolic value in the debate over regeneration and gentrification processes in the inner city area of São Paulo, vacant building occupations are simultaneously intended by their proponents as a means to provide shelter to those in need; experiment alternative ways of producing low-income housing in well-located urban areas; and contribute to wider struggles for urban reform across Brazil.

This paper explores in detail the spatial practices of individuals and groups occupying a building known as Ocupação Marconi. It focuses on the production of the building being seen as a device for advancing alternative formulations of citizenship, and discusses the spatial and social implications of this interpretation at different scales.
Beatrice De Carli & Alexandre Apsan Frediani, Bordering Citizenship in São Paulo
Blurring boundaries, reconstituting borders: Examples from Cairo public space since 2011

Over the past three years, Cairo has been experiencing major political transformations played out on its streets and in its public space. Throughout alternating conditions of flux and restoration, disruption and reestablishment of “order”, CLUSTER has been involved in a number of research and documentation projects as well as design schemes and intervention strategies to account for these changes and critically engage its spatial implications.

These projects range from the micro-scale of sidewalks and in-between spaces, to the city scale of infrastructure and public services. One common theme underlying these examples is the constant interplay of contestation and negotiation between not only competing interests and stakeholders, but also competing frames of reference and normative orders, whereby borders between public and private, formal and informal, and the spatial and political are being repeatedly blurred and reconstituted.

This presentation offers a background for the broader context of the rapidly shifting political and urban landscapes in Cairo during the past few years, and discuses a few examples ranging from street vendors, downtown passageways, to informal development along the Ring-road and Ard al-Liwa community Park.
Omar Nagati, Blurring Boundaries, Reconstituting Borders
Participatory Research for Monitoring Air Pollution: Citizen sensing for fracking-related environmental concerns

The Citizen Sense project investigates these questions by attending to the relationship between technologies and practices of environmental sensing with citizen engagement. This presentation will discuss Citizen Sense project work on participatory engagements with "pollution sensing" in relation to monitoring air quality near infrastructure of unconventional natural gas extraction in the form of hydraulic fracturing (or fracking) in northeastern Pennsylvania, USA. This presentation will outline citizen-sensing practices that monitor fracking- related pollution that are already underway, and it will discuss our attempts to contribute to monitoring processes through further participatory and practice-based citizen-sensing initiatives.
Helen Pritchard, Participatory Research for Monitoring Air Pollution
This presentation will give an account of the disappearance of Malaysian Airways Flight MH370 into the southern Indian Ocean in March 2014 and analyse the rare glimpses into remote ocean space this incident opened up. It follows the tenuous clues as to where the airplane might have come to rest after it disappeared from radar screens - seven satellite pings, hundreds of pieces of floating debris and six underwater sonic recordings - as ways of entering into and thinking about ocean space. The paper pays attention to and analyses this space on three registers - firstly, as a fluid, more-than-human materiality with particular properties and agencies; secondly, as a synthetic situation, a composite of informational bits and pieces scopically articulated and augmented; and thirdly, as geopolitics, delineated by the protocols of international search and rescue. On all three registers - as matter, as data and as law - the ocean is shown to be ontologically fluid, a world defined by movement, flow and flux, posing intractable difficulties for human interactions with it.
Lindsay Bremner, Fluid Ontologies in the Search for MH370
The paper addresses the question: what is the method for understanding architectural or spatial production or artefacts that are placed among situational relations in the political landscape and environment? I suggest some responses to this question in three contexts: the method itself, anachronic meaning of the artefact and the design of exception. In the architecture faculty at Mardin Artuklu University (Turkey) near the Syrian/Iraqi border, I run a forensic architecture graduate course, where we research methodology addressing refugee conditions, the urgency and design of camps, related co-existence of public spaces, forensics of the excavation of past extrajudicial killing (faili meçhul), and communities inhabiting the conflict territories along the border. In my talk I will discuss how a transversal instituting and methodology is possible - or is it possible - in order to run such an architectural education and alternative pedagogy. How can a collective experience of the translocal production of knowledge and of instant alliances lead to the creation of common spaces for uncommon knowledge in war zones?
Pelin Tan, Transversal Materialism: On method, artefact and exception
Double blind, double bind: the plane that disappeared - (a problem of first and second order observation)?

The empirical focus of this paper is 'the disappeared plane', Malaysia Airlines Flight 370 (MH370/MAS370), the scheduled passenger flight from Kuala Lumpur to Beijing that lost contact with air traffic control on 8 March 2014 at 01:20 MYT, less than an hour after takeoff. The paper explores how it is possible for a plane to 'disappear' in an era of total planetary observation by describing the composition of a surface of visualization in terms of the boundary-making capacities of hypotheses of sight. It will be argued that, as a function of algorithmic rules of digital computation, today's surfaces produce a patterning of vision that is cross-cut by multiple orders of observation and a whole variety of depths, intensities, neuroses, psychoses, and densities. In dialogue with Galison's work on secrecy, the paper aims to show how the apparently edgeless surface of the locally flat surface of global planetary vision is striated not only by multiple corridors and targets, but also by blind spots, fuzzy patches and edges, resulting in the production of the recursive fractal of public-private in terms of degrees of public-ness and complex patterns of political and economic inclusion, exclusion and belonging.
James Bridle, The Electromagnetic Border
▲